And speaking of changes...

...I just gutted my personal website. I've always hated the outdated debris you find scattered around the 'net, and I was getting to be one of the biggest contributors of said detritus. It's kind of sad in a way--kind of like taking a match to a collection of personal mementos--but now I have a fresh canvas to work with when I'm ready to do it.

For the time being, though, I'm busy with working and creating other stuff. This is "Hell Week: Part I" for me in the sense that my ridiculous Monday-Tuesday schedule gets repeated on Wednesday and Thursday--one of three times this quarter. Yeah, I know that normal people (of which I was one once) have to work *five* days a week in some God-forsaken cubicle, and to that I can only reply that two days on my current schedule kick my ass FAR worse than my 9-to-5 ever did. Between those back-to-back classes on Mondays, getting back to campus Tuesday mornings, and creating podcasts/writing exams and assignments/grading papers/revising my classes for summer, I'm whipped come mid-week. Zzzz....

On other fronts, my very first big band arrangement--an afro-cuban interpretation of Henry Mancini's "Charade," seems to be enough of a success that the Big Bad Jazz band will be performing it next week. w00t! If anyone wants to see its debut, come on out!

Which reminds me, I had a *blast* subbing on Boyd Cannon's big band last week. This group plays every third Thursday at the Border's Books and Music in Thousand Oaks, and my buddy Jennifer Hall recommended me to the leader. I'd heard it was a good band (a rehearsal band for a lot of studio guys, I guess) so I was pretty intimidated--especially since I was to play tenor sax, which isn't my main axe. But my pal Jim Mettler, the bestest instrument repair guy in just about the entire world, did some work on my tenor and it was playing SWEEEET that night--all I had to do was push buttons and blow. Anyhow, Boyd said he'd have me back, so I guess it must have sounded okay. Cool.

Much as I'd like to launch into the diatribe about corporate strategy that I've been mulling over for several days now, I'm gonna hold off for the moment and get to bed. It just occurred to me that I'm functioning on only a few hours' sleep from last night, and I think I've finally reached the stage in my life when no sleep=horriffic cold every time I turn around.

Sucks to be old, I guess. But it's better than the alternative.
Posted by Leanne Powers at 11:32 PM 1 comment:

A few of my favorite podcasts...

Here's what I keep coming back to...

Deloitte Insights Podcast: A great discussion of corporate strategy from the folks at Deloitte. They had a great session on the Strategy Paradox back last February.

Feast of Fools - Gay Fun Show: I'm not sure how to describe this, except to say that Marc and Fausto are really, really funny, and you don't even have to be gay to appreciate this one.

MAKE Magazine: This is a video podcast, generally concerned with weird things you could make in a weekend. These guys sent a balloon up to near-space to get some pictures. They never recovered it, but it's pretty cool that people try stuff like that.

NPR Car Talk call of the week: I only wish Click and Clack would make their whole show available by podcast. This is sort of a teaser, but it's worth the download.

The CNN Daily: A well-made videocast that catches me up on daily news highlights.

More to come as I discover them...
Posted by Leanne Powers at 5:05 PM 1 comment:

This time, though, I'm just catching up with the 21st century in the sense that I'm the proud owner of a shiny new video iPod. The 80GB version no less, and boy, is it cool.

I've actually been a bit resistant to the whole iPod/mp3 player movement, mostly because I do the vast majority of my listening to music either in my car or at my desk, and an mp3 player hasn't exactly been the best solution for either. I've used iTunes for quite a while at my desk (I mostly stock it with music from CDs, which has been an ongoing process), and that makes the separate player redundant. In the car, I don't have an mp3 jack, and the quality of the FM transmitters I've tried has been poor enough to turn me off getting a player for that purpose, at least until I get around to fixing the auxiliary input problem--probably, by replacing the car.

What changed everything, as it turns out, was the opportunity to develop a hybrid version of my Principles of Management course this quarter. My plan was to change the class to 50% face-to-face and 50% online delivery, with the goal of keeping people more interested in what can turn out to be some pretty dry material. Since this is an evening class and evening students tend to be especially intolerant of classes that drag on, I decided to replace half the class meetings with a combination of online videos and exercises, and fieldwork. I had a library of videos I was pretty sure I could edit and convert to streaming media, so I pitched the idea to my department chair and she agreed. Cool. Now all I needed to do was figure out how to get the multimedia stuff together.

Enter the analog-to-digital converter (which is an expensive little bugger if you need a Firewire version) and iMovie. It took a little tinkering to get my first very basic conversion done, but I posted the resulting video and was amazed that people were actually able to view it. Over the next couple of weeks they got a little more complicated, with the most recent offering being a series of CEO profiles spliced together from various items in my library using some cool titles and transitions. I also wanted to make this compatible with portable media devices, but I didn't have a test player so I needed to acquire one. Which made it tax-deductible. And the campus bookstore had good prices. Dang.

So... I got the iPod, the usual assortment of necessary accessories, and I've been experimenting. Tranferred my music over in just a few minutes, and tried it out in the car using one of the aforementioned FM transmitters, with predictable results--L.A. has WAY too many radio stations to allow those things to work particularly well. Then I started poking around in areas of iTunes I hadn't explored before... bought a couple episodes of South Park and one of Law and Order, but I realized pretty quickly that downloading TV shows was going to get expensive, and if watching it wasn't a priority at home, why pay even more for the same stuff?

But then, I discovered free podcasts. OMG--a nirvana for nerds.

Took me all of two days to subscribe to at least 35 of these things. And they're GREAT. I've got everything from the BBC morning headlines, to the Center for Strategic and International Studies and the Harvard Business Review IdeaCast, to Geekgirl, Slate Magazine, NOVA Vodcast, and the Gay Fun Show: Feast of Fools (which is a side-splitting talk show hosted by--you guessed it--two gay guys). It's sorely tempting to suddenly turn this whole blog into a podcast review, but I'll try to limit that to notables. Meanwhile, though, I'm glad I found all this, because my commute to work was slowly driving me insane, and for news and talk, less-than-crystal sound quality is perfectly adequate.

In other news, I'm working a lot and practicing as much as possible. Work is definitely interesting this quarter--especially so because I ended up with three back-to-back classes on Mondays and Wednesdays, which means six straight hours in front of students. That is challenging enough, but the room scheduling also puts me in three different buildings, complete with a trek across campus between them. I think the full impact of the awkward logistics hit me this past week, when I realized I could either drop equipment off in my office before my next class *OR* go to the bathroom, but I couldn't do both. Yikes. Could be that my next geeky purchase ends up being a skateboard. 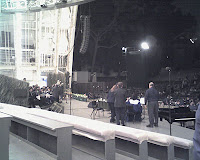 Music is also relatively busy. Terry is throwing some polytonal stuff my way which is hard to get my brain around, but fun to work on. The flute chops continue to improve, and I got to play at the Hollywood Bowl this past weekend, which allowed me to take the ultra-cool backstage photo shown here. But with work as busy as it is, I haven't had time to do all that much else. Maybe next quarter things will slow down a bit.

And with that, I'd better get back to paper grading. Sigh. But no geek's blog would be complete without some random YouTube crap. Enjoy.
Posted by Leanne Powers at 9:24 PM No comments: