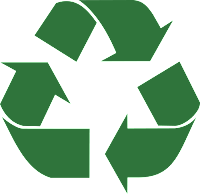 I was wondering whether I could recycle old CDs tonight, and stumbled on the Internet Consumer Recycling Guide, maintained by the folks over at obviously.com. Especially helpful is their page, The World's Shortest Comprehensive Recycling Guide. Good for posting on the back door (or wherever stuff gets sorted in your house).
Posted by Leanne Powers at 7:55 PM No comments:

I can haz microcar?

Been lusting after these cars since I first saw one in London in 2003, and when I learned early last year that Daimler was *finally* going to make them available in the U.S., I signed up and anxiously awaited the car's launch.

So... about a year later, I finally get to drive my own smart fortwo. And boy, is it cool.

A few specs: This car has a 1-liter gasoline-powered engine. It's a two-seater that weighs in at about 1800 pounds, and is just under 9' long by 5' wide. The EPA mileage rating on it is about 42/highway, which is better than every gas-powered car sold in the U.S. except for two: The Toyota Prius and the Honda Civic hybrid. However, *this* car doesn't come with the $23,000+ pricetag those do, and... well... let's just say it's WAY more fun to drive.